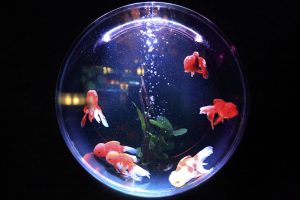 When I first joined the Foreign Service, I was told by several seasoned officers that the world you live in while overseas is like a fishbowl in many ways. In many cases, it is as though you are back in high school, where everyone knows everything about everyone else and make it a point to know things about everyone even though there may not be a personal relationship between you and the person you want to know things about. As a newbie, I took this advice to heart and have actively worked to avoid finding myself in this situation whenever possible, by attempting to stay above the gossip fray (though I am not always successful, I am after all only human) etc. However, in many places overseas the expatriate community is very small and it is only a matter of time before you know everyone and they know you. It is also often the case that social outlets (i.e. Things To Do) are limited, so inevitably since you can’t focus outwardly to occupy yourself, you instead focus inwardly and hone in more acutely on those around you. While at times this phenomena can be rather annoying, like when you are excited over some news from home and want to share it with a friend but somehow the grapevine has already imparted your news to them, so while still exciting for you to talk about with your friend, it is no longer a surprise to them. It actually isn’t all that bad, all the time because in many ways the friendships that you make while overseas become the ones you treasure most and become the relationships that last over time by virtue of the experiences and close quarters that you share.

That said, one of the things that annoy me most about some of my work colleagues is when they say things like, “I can’t seem to make any local friends” or “I can’t meet anyone outside the mission”. These statements or ones to that effect never cease to amaze me. It is true that some societies are more closed than others and it is no secret that people openly love to hate America and Americans (while ironically actively consuming our music, culture, technology, exports etc…), this still isn’t sufficient to close down all avenues to friendships beyond the mission or outside the diplomatic community, if one truly seeks them. I have a sinking suspicion that for many folks they simply don’t put themselves out there enough or put themselves in the right places to meet folks outside the bubble. I even have some colleagues who seem simply to prefer “living” overseas but remaining entirely insulated by the bubble the entire time and do little to no exploring of the country and the culture that they have the privilege of living in. It is, of course, different living overseas, and getting used to the language can be hard, luckily there are websites like https://lilt.com/what-is-translation-memory to help with multilingual business. Taking part in the culture of where you are staying can make living away so much easier. To me, it is kind of sad and defeats the purpose of living/working overseas if they don’t even want to try and step outside of their comfort zone. I have been fortunate during my experiences overseas to have made a wide circle of friends, from my work colleagues both American and Foreign National, to counterparts from other Embassies and Missions, to hashing group friends, to people I meet while pursuing a hobby like scuba diving, tae kwon do, yoga or language classes, etc. I relish the diversity of my friendships and like to keep my social circles/network wide. When I do this, I find that I am not trapped inside the bubble as much per say, because I have opportunities to do things beyond it and my overall experience overseas is significantly richer and more meaningful.

I am not exactly sure when or where this thought came into my head but I think it was highlighted at a holiday party that I attended the other evening. The party was held in a golf country club, the food was catered, the ambience wonderful, the crowd a good mix between expatriates, foreign nationals, easterners, westerners and everyone in between. The music was even good, which in my experience is really hit or miss and has been a lot more miss lately than hit! My husband and I do what we always do at parties like that which is to say hello to any and everybody, spend time talking to our friends but not hesitating to be introduced to new people and introducing people we know to others. However, as the night wore on it became painfully obvious that the lines were drawn, certain groups were only mingling with others within their same group, while others wouldn’t even leave their tables. I guess some of this is all very normal and is just part of human behavior against the backdrop of a social event, which is stick to what’s comfortable which is usually who and what you know. However, this type of event is exactly the kind of opportunity that I mentioned above regarding, “putting yourself out there” to meet other people outside your immediate circle, who are new and interesting. By the end of the night, I had the number for a Pilates instructor (which is something I desperately need at 5 months pregnant if I ever hope to bounce back), a caterer, the DJ, a new couple in town from Cote D’Ivoire who are interested in the hashing group I am a part of among other cool and fascinating people. My goal for the evening wasn’t necessarily to meet new people, it was simply to have a good time and let loose a little bit since we finally had a babysitter and a good reason to go out. However, since I am open to the possibility of meeting new people, I did and it made the evening even more memorable.

I guess I say all this to say that when you are living and working overseas, if you truly want to enjoy the full experience of it, then you have to be open to possibility and willing to meet people at anytime and in ways that may seem off the beaten path from what you are used to. Believe me in the end, it is well worth it, and honestly what have you got to lose?

Previous Post: « Here goes nothing!
Next Post: Not getting enough sleep: 4 Ways to Cope with a Snoring Partner »

Born in New York City and raised in upstate, NY, I now live in La Paz, Bolivia with my husband and children.  My family is my joy and purpose and keeps me focused on the things in life that matter most.

A little more about me:  I am an every woman, by that I mean I love to do and am interested in a lot of things.  I am a wife, mom, sister, friend, ambitious and career focused individual, writer and aspiring author, do-it-yourself (DIY) loc’d naturalista, foodie, avid reader, movie buff, sports enthusiast, passionate about music, dance and the arts, news junkie, advocate for the underdog/under-represented, with an incurable bug for traveling and exploring the world.

Thank you for visiting and I hope you decide to stay!

As the Editor-in-Chief of Griots Republic, I hire nearly 120 various writers each year and as you can imagine, I also read a lot of content. You can always decipher between writers who write to simply get a check and those who are passionate about their craft. Lia, thankfully, belongs to the latter. Lia writes to inspire, to teach, and take you on a journey and we are blessed that she chose our publication to share her skills.

Lia is a captivating and passionate writer, speaker and content creator. Through her Lia World Traveler and Peace & Purpose brands, Lia brings an important perspective and platform to global and cultural issues that represent voices of color. She is a talented media personality, children's book author, blogger and freelance writer. For a smart, relevant and insightful take on travel, culture, parenting and more, consider having Lia lend her subject matter expertise to your publication or media outlet.