Why aren’t I progressing in my career as quickly as my male counterparts?  Why did the person I brought in already get promoted before me?  I could have done that job, why didn’t I go for it?  Have you ever asked yourself these questions and if so, what have you done to change your circumstances?  According to BusinessInsider.com, “Women are 57% of college graduates and 63% of masters degree holders, but that majority fades as careers progress.”  The question is why?  We know the glass ceiling is a real thing that women in the 21st century unfortunately still grapple with, but we can no longer point the finger of blame at male status quo anymore.  In numerous conversations with female friends, colleagues, and mentees and reading some of the many books on the market on the topic including but not limited to “Lean In” by Sheryl Sandberg, “The Confidence Code” by Katty Kay and Claire Shipman, and “Strategize to Win” by Carla Harris, the same themes kept coming up over and over again and I realized there are three main things women do to hold ourselves back from success in the workplace (and in general). 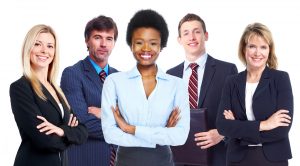 Believing that you aren’t good enough or you aren’t ready yet because you either don’t have 100% of the credentials, enough experience, or because you don’t feel completely “ready” for the next step is the thought/belief pattern that holds women back from taking leaps in their careers.  This includes applying for positions in a new/different field, asking for more money or a raise, taking a more visible/leadership role on an important project, or seeking a promotion.

2.) Too much modesty and no self-advocacy

Numerous studies suggest that when it comes to evaluating their own work performance, men consistently rate themselves more positively than women. Some of the reasons theorized to be behind this result are that women are socialized to be more modest about their work and subsequent work achievements.  The same research also indicates that men are more motivated by the “visibility of their work”, while women are more motivated by the “security of their work relationships”.  Men are more inclined to take firm positions on key issues and confidently advocate for their chosen initiatives; even when there is a degree of self-doubt, men are more likely to “fake it ’till they make it”.  Women in contrast are more prone to hang back and often don’t or won’t speak up because they are worried about being considered too tough, aggressive, or worse.

To be clear, the “fear of success” does not mean women are afraid of achieving a particular career goal but rather it refers to the fears about what the consequences or ramifications of the achievement will mean.  For example some typical concerns are can I withstand the stress that this may cause?  How much more time will this require me to spend in the office?  Is this worth the effort, the long hours, and the headaches?  Some concerns relate to the fear of failure such as, can I cope with the additional demands of a bigger role? What if I make a mistake? What if I can’t do it and if I fail what will that mean for my reputation?  A third area of concern is those that relate to the implications of career success on our home life, such as how will my husband/partner react to my success?  What impact will this have on my children?  Will I be faced with jealousy or criticism by my friends/acquaintances? Can I deal with being the one that’s different or set apart?

So how do we begin to change this?

As a start, women must pay attention to and reflect on the behaviors that have been demonstrated to help people move up the career ladder in their organizations.  Women also need to communicate their accomplishments on a wide scale beyond first-line managers, and take on assignments that broaden their exposure and contributions to the larger organization (i.e. move beyond your comfort zone).

Usually, we engage in the above behaviors unconsciously, so becoming more aware of when we are indulging them is getting you halfway there, then choosing to do or think something different moves you closer to the success you deserve and have worked so hard for.