*This post was inspired by conversations with some good friends, all of whom have been married for over 15 years.

I’ve said before how complicated love can be. Anyone who has ever been in love can understand what I mean when I say you can love someone even when you don’t always like them.  I know I’m not the only one who has ever been in a romantic relationship where (once you’ve left the honey-moon phase), the person on the other side says something, does something, doesn’t do something, is annoying, let’s you down, and seems to incessantly push your buttons causing you to feel so frustrated and angry that you start fantasizing about life without them in it.  No matter the reason for dis-liking them, it happens to many of us and is completely normal especially in long(er)-term relationships. 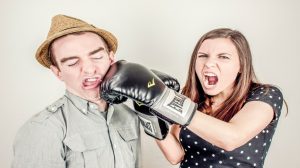 Here is a personal story from one of my friends to help illustrate the point:

Jane and Charles met in college over 20 years ago and have been together for the last 15 years. They became adults together, had children and are raising a family together, been through many highs and lows together, and Jane doesn’t know what life would be like without Charles in it.

Jane “chose” Charles because they had fun together, made each other laugh, he accepted her for her faults/flaws, she felt she could be her “true” self with him without fear of judgment, and (what every woman looks for in a man), he was stable, reliable, and dependable.  Now that the kids are getting older and will soon be headed off to college, Jane has the time to reflect on her relationship and the future.  Jane loves Charles but over the last few years she has found it increasingly difficult to “like” him.

Jane and Charles have changed a lot in 20 years and personality characteristics that were once cute, quirky, and unique are now intolerable. Charles has become much more conservative and close-minded, which is especially concerning to Jane because she suspects one of their children might be gay.  When she tries to talk with Charles about the subject she gets nowhere and feels like she has been abandoned to figure things out on her own, which only succeeds in making her feel isolated and frustrated.  Compounding the situation is the fact that they are both at a point in their careers where they are on deck to become the next “big boss.” This means they are both spending a lot of time focused on and physically at work.  What precious “free” time they have is spent with the kids, leaving little room for anything else.  Jane is increasingly concerned that once the kids leave the nest, she and Charles will have nothing in common to tie them together.

Jane doesn’t want the relationship to end but knows it has to get better and quickly.  She wants to laugh and have fun like they used to, to feel excited by and about Charles, to spend time with him without having to censor what she says or how she acts because everything he says and does sets her off; creating an environment ripe for unnecessary and damaging arguments.  Jane wants to not be bothered by all of the little things Charles does/does not do like: putting the toilet seat cover down, replacing the toilet paper rolls, leaving all the lights on in the house all the time, listening to her when she tries to talk to him, following through on the things he says he is going to do, not re-adjusting the driver’s seat back to her preferences when he uses her car, leaving her to take care of all of the “family life business” – making appointments, signing the kids up for their activities, doing all paperwork associated with the kids, cleaning and de-cluttering the house, grocery shopping, cooking, laundry, etc.  Jane struggles with how to let these annoyances go and right now she can’t.

Usually the negative feelings that make you dislike your partner are more about something going on with you and instead of looking inward you are transferring your feelings to them.  It could also be that your partner is changing in ways you hadn’t noticed before and in ways you didn’t think were possible, like Charles’ reaction to the conversation about their child potentially being gay.  It seems like one day you wake up and realize the person you’ve been with for so long and who you are in love with has turned into someone you can’t stand to be with.  So, before you fall completely out of like with your partner, take the time to do the analysis as to the “root” cause(s) of your negative feelings, consider if you’ve been preoccupied or overly focused on work, the kids, an aging parent, the purchase of a new home, or a combination of these and other competing interests.  When you lose sight of your spouse, transfer your internal stresses/negativity onto them, and don’t prioritize the relationship above everything else, you start down a path that is sometimes impossible to come back from.

The key is to find ways to separate the negative feelings you have about the actions (in-actions) of a person from the person themselves.  If you are able to do this, your general perception of your partner will improve and in time you will be able to see the person you fell in-love and like with is still there. Keep in mind also that it is unrealistic to think your long-time partner will be the same person today that they were in the beginning of the relationship.  If you’ve grown apart or feel distant from one another, treat getting to know one another again like an adventure.  Date your partner, find out what makes them tick, where their head is at, and what they are interested in.  The bonus of dating someone you are already in a relationship with means you can avoid the awkward parts of dating, the good night kiss, who picks up the bill, the question of whether or not to let them come upstairs, etc.   Make it fun!  Finally and most importantly, instead of dwelling on the past, focus on the future and what your relationship can become; something new, something better, something stronger.